Social Engineering – What exactly is it and who might be victims?

Social Engineering – If you don’t work in either the security or IT industry, you may wonder what the term means and if it forms any real threat to you organisation. If you have heard the term, then assuming it is an IT issue in isolation, would be a mistake.

Social engineering can be likened to hacking attacks against information systems where a tool is used to probe those systems to exploit vulnerability.  In the case of social engineering, human attackers use guile, perhaps inside knowledge or just plain bluff to try to penetrate the defences of the individual to obtain the knowledge they are not entitled to know.  In other words, they hack information or access it from an individual.

More often than not attacks to obtain information, including sensitive personal data, are targeted against organisations by using techniques to manipulate unsuspecting staff to willingly provide information, usually because they have been duped into passing information to an individual, even though they do not know them.

The ability of an attacker to develop a rapport with the target is important, which together with some inside knowledge, acquired from research or the use of an insider, will often pay dividends to establish that familiarity that puts front line staff off their guard.  Particularly vulnerable are those at the “coal-face” – customer facing staff such as receptionists, telephone exchange or help-desk support staff.

The approaches are often apparently innocent in nature and the attacker could pose as a new or former employee exchanging gossip or advice and may request help perhaps for lost passwords.  The attacks are insidious and over time may provide nuggets of information about the organisation or individuals within it.

Another example is where access into a particular site is sought, an attacker may try to gain access by reporting to reception that they have something within a box for delivery to a named individual that research has identified is within the site.  Reception may be busy, or the attacker may time his moment by observing reception from a distance to find the right opportunity to prosecute his attack.  When challenged the suggestion that “it’s OK, I know where he is and I need a signature anyway” will often create that familiarity that will grant the intruder access.

As described above, social engineering is often linked to insider attacks, since the majority of physical or electronic attacks can be assisted in some way by an insider.  The little tit-bit of inside knowledge is used to get past the initial security perimeter be it verbal or physical.

Human nature enables social engineering to develop and become increasingly sophisticated as well as technical.  It is essential for all organisations, but particularly those that have sensitive or valuable assets to ensure that front-line staff are provided with regular training to be aware of the threat and be conscious to attack techniques.

Further information on Social Engineering and Insider threat can be found on our Slideshare account here https://www.slideshare.net/Advent_IM_Security/social-engineering-insider-and-cyber-threat you will need sound

Stolen TARGET Credit Cards and the Black Market: How the Digital Underground works By Ken Westin

I have been involved with several cases where organized crime rings have been unveiled, many of these have had connections to Russian and Eastern European groups. These groups generate a significant profit through stolen property acquired through burglaries, shoplifting, identity theft, credit card skimming and carding. Many underestimate the complexity of some of these networks and the revenue they generate.

The United States is a mecca for carders, simply because of the fact we are one of the last countries to rely on magnetic strip credit cards that are easily cloned and lack the security of newer chip and pin. The reason the U.S. is still using the technology from the 1960′s is a topic for another blog post altogether.

First the card numbers are sold to brokers who acquire the stolen card numbers in bulk. These are then sold to carders. The price for valid credit cards can be as high as $100 per card depending on the amount of information available with the card, type of card and known limits of the card. Many of these sites offer guarantees on the validity of the cards and will provide a valid replacement if it is blocked. Now that is customer service. 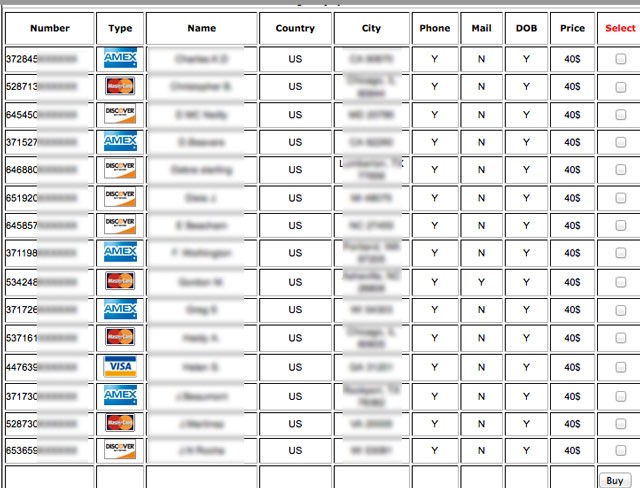 The Credit to Gift Card Shell Game – Find the Fraud!

One lucrative method of “carding” involves a shell game, where stolen credit cards are used to charge pre-paid cards. These cards are then used to purchase store specific gift cards, such as from Amazon for example.

The carder then uses that gift card to purchase high value goods, usually electronics such as cell phones, computers and game consoles. This process makes it difficult for companies to trace. By the time it is figured out and the cards blocked the criminal is in possession of the purchased goods.

These packages are usually then shipped via a re-shipping scam. Unsuspecting individuals are recruited as Mules (re-shippers) usually through legitimate channels such as Craigslist job listings promising “easy work-from-home jobs” and usually in the United States as it raises fewer red flags.

The re-shipper then assembles multiple packages and ships them usually outside the country, or directly to someone who purchases the goods from an auction site the fraudster has posted the goods to.

The carder may then sell the electronics through legitimate channels such as through eBay, or to avoid risk can sell the goods through a hidden underground “deep web” site. Most people know the “deep web” from the Silk Road, which was recently shut down by the FBI, reappeared and then vanished again

The Silk Road was a marketplace for illegal products such as drugs online. However the Silk Road had somewhat of a code of ethics, as certain products were restricted from sale such as pornography, weapons, personal data (stolen credit cards, passwords etc), poisons, or weapons.

There are many hidden services available that do not have such scruples. There are numerous places on the deep web that sell stolen credit cards and goods acquired through carding.

On these hidden illegal websites the goods are usually sold at deep discounts on the black market, usually around 50% of retail and reshipped or sent to a secure drop (vacant house etc) a purchaser has setup for this purpose.

Right now the entire carding underground is busy, as banks scramble to monitor fraudulent activity on the stolen Target cards, the carders need to stay a step ahead and move quickly. Much of the credit card charges have already been made and thieves have already cashed out.

This process of detecting fraud by the banks is furthered hampered simply because of the holiday season and the high volume of transactions that are occurring. It is going to be tough time for fraud analysts this holiday season.

Protect your information by creating a secure password that makes sense to you, but not to others.

Most people don’t realize there are a number of common techniques used to crack passwords and plenty more ways we make our accounts vulnerable due to simple and widely used passwords.

How to get hacked

Cracking security questions: Many people use first names as passwords, usually the names of spouses, kids, other relatives, or pets, all of which can be deduced with a little research. When you click the “forgot password” link within a webmail service or other site, you’re asked to answer a question or series of questions. The answers can often be found on your social media profile. This is how Sarah Palin’s Yahoo account was hacked.

Social engineering: Social engineering is an elaborate type of lying. An alternative to traditional hacking, it is the act of manipulating others into performing certain actions or divulging confidential information.

How to make them secure

Robert Siciliano is a McAfee Consultant and Identity Theft Expert.

See him discussing how to protect yourself from identity theft on CounterIdentityTheft.com. (Disclosures)

Password security is more important than ever.  If you wonder which ones are the worst to use, check out the 25 most common passwords of 2013 and avoid them like the plague.

This year’s list had a large number of Adobe Systems-themed words and short strings of numbers. Words like "jesus," "football" and "ninja" -- which were popular last year -- dropped off the list in 2013.

"Seeing passwords like 'adobe123' and 'photoshop' on this list offers a good reminder not to base your password on the name of the website or application you are accessing," Morgan Slain, CEO of SplashData, said in a press release.

How can consumer protect themselves? SplashData suggests these tips for making more secure passwords:

Here are the 25 most common passwords of 2013, along with the change in rank from last year.