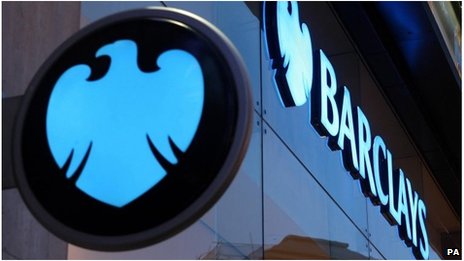 Barclays said it would "contact and advise" all affected customers

Investigations have been launched after a report that thousands of confidential files with Barclays Bank customers details had been stolen and sold.

The Mail on Sunday said an anonymous whistleblower had handed it a memory stick with the personal data of 2,000 Barclays customers, saying information on a further 25,000 was also available.

The files are said to hold passport and national insurance numbers, as well as money and health information.

Barclays said it was investigating.

The report said the data, which also contained the individuals' attitude to risk, had been sold to "rogue City traders" and was "worth millions on the black market because it allowed unsuspecting individuals to be targeted in investment scams".

The files date from 2008. The customers in question had originally contacted the bank seeking financial advice from Barclays Financial Planning.

The Information Commissioner's Office said it would be working with the newspaper and police who were seeking more details.

Financial commentator, David Buick, said the report was alarming: "It's the breach of trust... you as an individual actually knowing that your personal details about your life has been passed on to potentially an unscrupulous individual who will try and behave like a maverick and capitalise on your life.

"If this is proven it is absolutely disgraceful."

Barclays said it had contacted regulators as soon as it had been made aware, adding that it was grateful to the Mail on Sunday for bringing this to its attention.

''We will take all necessary steps to contact and advise those customers as soon as possible so that they can also ensure the safety of their personal data," a Barclays spokesman said.

He said protecting customers' data was a "top priority", adding: "This appears to be criminal action and we will co-operate with the authorities on pursuing the perpetrator."