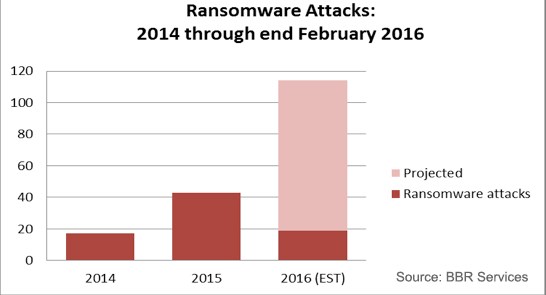 NEW YORK, March 8, 2016 (GLOBE NEWSWIRE) -- Beazley, a leading provider of data breach response insurance, today released its Beazley Breach Insights 2016 findings based on its response to over 2,000 breaches in the past two years. The specialized Beazley Breach Response (BBR) Services unit responded to 60% more data breaches in 2015 compared to 2014, with a concentration of incidents in the healthcare, financial services and higher education sectors.

Ransomware on the rise in healthcare

Hackers are increasingly employing ransomware to lock up an organization's data, holding it until a ransom is paid in nearly untraceable Bitcoin. Hollywood Presbyterian Hospital in Los Angeles reported suffering a ransomware attack in February 2016 and ultimately paid the hackers $17,000 in Bitcoin. A year earlier, the FBI had issued an alert warning that ransomware attacks were on the rise.

This trend is borne out by Beazley's data. Breaches involving ransomware among Beazley clients more than doubled to 43 in 2015 and the trend appears to be accelerating in 2016. Based on figures for the first two months of the year, ransomware attacks are projected to increase by 250% in 2016.

"Clearly, new malware programs, including ransomware, are having a big impact," said Paul Nikhinson, privacy breach response services manager for BBR Services. "Hacking or malware was the leading cause of data breaches in the healthcare industry in 2015, representing 27% of all breaches, more than physical loss at 20%."

Nikhinson added, "Healthcare is a big target for hackers because of the richness of medical records for identity theft and other crimes. In fact, a medical record is worth over 16 times more than a credit card record."

Higher education also experienced an increase in breaches due to hacking or malware with these accounting for 35% of incidents in 2015, up from 26% in 2015.

Colleges and universities are reporting increased "spear phishing" incidents in which hackers send personalized, legitimate-looking emails with harmful links or attachments. The relatively open nature of campus IT systems, widespread use of social media by students and a lack of the restrictive controls common in many corporate settings make higher education institutions particularly vulnerable to data breaches.

In the financial services sector, hacking or malware was up modestly to 27% of industry data breaches in 2015 versus 23% in 2014. Trojan programs continued to be a popular hacking device according to Beazley's data.

Five steps organizations can take to help protect their data

Attacks often succeed by exploiting misconfigured systems or human error, such as luring employees to respond to phishing e-mails. Here are five steps organizations can take to help protect their data:

Beazley has helped clients handle more than 3,300 data breaches since the launch of Beazley Breach Response in 2009 and is the only insurer with a dedicated in-house team focusing exclusively on helping clients handle data breaches. Beazley's BBR Services team coordinates the expert forensic, legal, notification and credit monitoring services that clients need to satisfy all legal requirements and maintain customer confidence. In addition to coordinating data breach response, BBR Services maintains and develops Beazley's suite of risk management services, designed to minimize the risk of a data breach occurring