What is a card data compromise?

A card data compromise occurs when payment card information is stolen from a merchant. Some examples of card data theft include:

There are several ways card data can be stolen; not all are computer or Internet-related. However, in the world of computers and Internet technology, thousands of technical issues make merchants vulnerable to card data theft.

The majority of data compromises happen to merchants who process fewer

Stolen data results in fraud and reduced card use

Because merchants aren’t aware when card data is stolen, it often takes weeks, months, and sometimes years for a merchant to learn of a data breach. As a result, once a merchant has learned of a compromise, fraudulent card use has likely begun.

The PCI DSS is a set of requirements for the security of payment card information. These requirements were developed by the PCI Security Standards Council (PCI SSC), which was founded in 2006 by the major card brands (Visa International, MasterCard Worldwide, JCB International, Discover Financial Services, and American Express).

All merchants that process, store, or transmit cardholder data are required to comply with the PCI DSS standards.

The PCI SSC has authorized a select set of security vendors to help merchants ensure their proper compliance with the PCI DSS.

Merchant consequences of a data compromise

The card brands require vulnerabilities found in the forensic investigation be remediated3. Updating security requires employee labor as well as IT professionals making the necessary hardware, software, and network modifications. On average, this costs over $2,000.

The card brands may fine the acquiring bank for the merchant data compromise, but this fine is almost always passed on to the party responsible for the point of the breach—the merchant. The compromise fees will vary depending on the following conditions:

These fines are relative to the scope of the breach, but typically start around $5,000 with the potential to exceed $500,000 from each card brand.

In the event card data is compromised, banks must determine the extent to which they will issue new cards to replace the ones that have been stolen, and monitor accounts where there is the suspicion of fraudulent charges. The cost associated with these actions may be passed on to the merchant responsible for the breach.

For example, MasterCard may require up to $25 to reissue cards to customers and $5 to monitor accounts where no card was reissued.
Fraud reimbursement

When a merchant is compromised, card brands may require the acquirer to help pay for fraudulent charges against the stolen cards, normally calculated in chargeback costs5. The acquirer may pass these costs on to the merchant. Depending on the credit limits and the number of cards stolen, these penalties have the potential to be enormous, as stolen cards may remain in circulation long after the breach. One small merchant recently reported nearly $450,000 in fraudulent use of stolen cards. These penalties are relative to the size and scope of the breach and are at the discretion of the card brands. Card brand non-compliance fees In addition to compromise penalties and fines from the card brands, each card brand requires compliance with their security program to protect card data. These programs are listed below:

Enforcement of these programs and fines are dependent on the card brand and their policies. MasterCard, for example, may assess noncompliance fines of up to $100,000 per violation for breaching its “Wrongful Disclosure and Failure to Safeguard Account Data” regulation6. According to Visa, members not PCI compliant at the time of a compromise may be subject to fines of up to $500,000 per incident.

Lost business & damage to customer confidence A recent survey found the following consumer trends that result in the event of a data compromise:

A separate study concluded that up to 70% of the cost of a compromise is revenue loss. While revenue losses of this magnitude may hurt a large corporation, they would be devastating to a small company. How do I prevent a card compromise?

The best way to prevent a data compromise is to comply with the PCI DSS. Non-compliant merchants are responsible for over 99% of all data compromises. PCI DSS compliance dramatically reduces your risk and limits your potential liability in the event of a compromise. 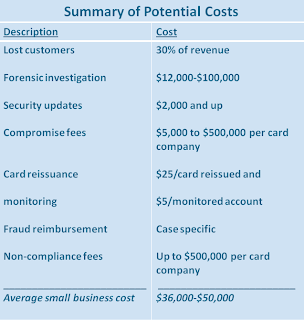